Finbarr Bermingham  – Finbarr Bermingham has been reporting on Asian trade since 2014. Prior to this, he covered global trade and economics in London. He joined the Post in 2018, before which he was Asia Editor at Global Trade Review and Trade Correspondent for the International Business Times.

Orange Wang – Orange Wang covers the Chinese macroeconomy, and has many years of experience with China’s monetary and fiscal policy moves. He also covered global market and financial news for a long time, with a particular focus on new technologies and their influences on economic growth and society. Before joining the South China Morning Post, Orange worked as a Shanghai Correspondent for ET Net, a Hong Kong financial news agency

Exporters from China woke up on Tuesday to the news that US President Donald Trump has pressed forward with what was previously considered the “nuclear option” in the long-running trade war.

By publishing a plan to roll out tariffs of up to 25 per cent on almost all of the remaining goods China sells to the United States, Trump has gone further than many thought possible when the trade war’s first skirmishes took place almost one year ago.

Overnight, the Office of the United States Trade Representative (USTR) published List 4 of the Section 301 regime of trade tariffs. This pledged to impose tariffs of up to 25 per cent on Chinese goods with an approximate total annual trade value of US$300 billion.

It was published hours after  China announced tariffs ranging from 5 to 25 per cent on US$60 billion of US goods to be implemented on June 1, in response to tariff increases by the US last Friday.

Some exporters were taken by surprise. “Frankly, I am super pissed, because this will completely kill my US market,” said Anna Kam, whose company exports video game console controllers, 85 per cent of which are sourced and manufactured in mainland China. They are then transported to Hong Kong, before being shipped to customers in Europe and the West Coast of the US.

“This will kill our market because our products have a 12 to 15 per cent margin. And imposing a 25 per cent tariff would kill our profits,” she said, adding that the Harmonised System tariff code 9504.50.00, governing “video game consoles and machines”, is exactly what they export under – and is included in List 4. 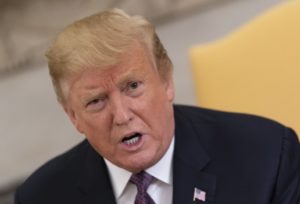 “It has already been quite bad. Actually our sales already dropped off significantly and I do not know what we’re going to do about it,” Kam said, adding that before tariffs were introduced, she had experienced non-tariff barriers, such as her goods being held up by US Customs without any explanation.

“Last month a really big shipment of mine got stopped in Los Angeles. It really started seven, eight months ago when my first shipment got stopped in New York. And then afterwards it’s just been consecutively, maybe every three or four months, one shipment will be stopped. In the five, six years I’ve been in this industry, I would say before these 12 months I have experienced two shipments being stopped,” she said.

A senior manager of a firm which makes hardware for Apple iPhones in Shenzhen said “if it impacts Apple, it impacts us”. The tariff code 8517.12.00 covers “telephones for cellular networks or for other wireless networks” – in other words: smartphones.

Products such as smartphones, clothing, toys and other electronics had been excluded from previous tariff lists, reportedly as a way of shielding the US consumer from the worst effects of the trade war. However, their inclusion now brings the reality that consumer prices will most probably rise in the US, should tariffs on the products in List 4 be implemented.

The likely process is for a public hearing to take place on the new tariffs on US$300 billion in products. If it follows the trend of previous US tariff implementations on China, this would take place around June 24. Should it progress from then, the tariffs could be implemented by July 10, according to research from Westpac Bank.

View all posts by novetec_admin →